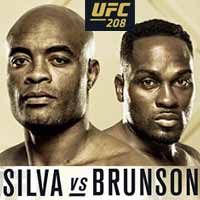 Review by AllTheBestFights.com: 2017-02-11, good fight between Anderson Silva and Derek Brunson: it gets three tsars.

The 41-year-old (8 years older than Brunson) black belt in Bjj, judo, tae-kwon-do and former Ufc Mw champion Anderson Silva entered this fight with a pro mma record of 33-8-0 (79% finishing rate) and he is ranked as the No.18 middleweight in the world but his last ‘clean’ victory occurred in 2012 when he faced Stephan Bonnar (=Silva vs Bonnar). In fact ‘The Spider, after this bout, was defeated twice by Chris Weidman (=Silva vs Weidman I and Weidman vs Silva II) and he came back to win just in 2015 against Nick Diaz (=Silva vs Diaz) but the result was overturned in a no-contest after the Brazilian tested positive for drostanolone and androsterone. Then Anderson ‘The Spider’ Silva has fought twice in 2016 losing to current #1 Ufc Mw champion Michael Bisping (controversial decision, Silva vs Bisping) and with Daniel Cormier (=Cormier vs Silva).
His opponent, Derek Brunson, has a record of 16-4-0 (75% finishing rate) and he entered as the No.11 in the same weight class. He fought three times last year beating Roan Carneiro (=Brunson vs Carneiro) and Uriah Hall (=Hall vs BrunsonWhittaker vs Brunson). Anderson Silva vs Derek Brunson is on the undercard of Holly Holm vs Germaine de Randamie – UFC 208. Watch the video and rate this fight!

(Free embeddable video hosted on Youtube and not uploaded by AllTheBestFights)
https://www.youtube.com/watch?v=IzEBrA_R2rw