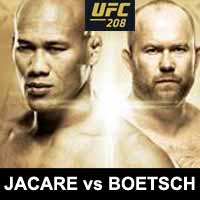 Review by AllTheBestFights.com: 2017-02-11, Ronaldo Souza vs Tim Boetsch gets three stars only thanks to a good finish (UFC Performance of the Night).

The black belt in Brazilian jiu-jitsu, judo and former Strikeforce Mw champion Ronaldo Jacare Souza entered this fight with a mma record of 23-4-0 (83% finishing rate) and he is ranked as the No.5 middleweight in the world (currently the #1 in this division is Michael Bisping). He lost to Yoel Romero in 2015 (via split decision, Jacare vs Romero) but he came back to win in 2016 against Vitor Belfort (=Belfort vs Jacare).
His opponent, Tim Boetsch, has an official record of 20-10-0 (75% finishing rate) and he entered as the No.19 in the same weight class. He lost three consecutive bouts between 2015 and 2016, the last one with Ed Herman, but then he has won over Josh Samman (=Boetsch vs Samman) and Rafael Natal. Ronaldo Jacare Souza vs Tim Boetsch is on the undercard of Holly Holm vs Germaine de Randamie – UFC 208. Watch the video and rate this fight!