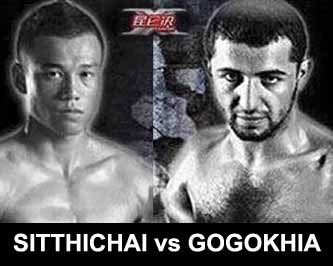 Review by AllTheBestFights.com: 2016-01-23, good fight between Sitthichai Sitsongpeenong and Enriko Gogokhia: it gets three stars.

The 2014 Lumpinee Ww champion Sitthichai Sitsongpeenong entered this fight with a pro kickboxing record of 104-29-6 and he is ranked as the No.2 super welterweight in the world while his opponent, Enriko Gogokhia, has an official record of 41-6-0 (21 knockouts) and he entered as the No.5 in the same weight class. In their first bout Sitthichai lost to Gogokhia via split decision (April 20, 2013 Sitthichai vs Gogokhia I), this second fight is the final of the “Kunlun Fight World Max tournament”. In the semifinals Sittichai beat Superbon Banchamek while Gogokhia defeated Victor Nagbe; undercard of Aikpracha Meenayothin vs Dzhabar Askerov – Kunlun Fight 37. Watch the video and rate this fight!