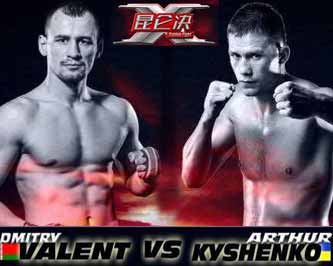 Review by AllTheBestFights.com: 2015-05-15, close and tough fight between Artur Kyshenko and Dmitry Valent: it gets three stars.

Artur Kyshenko entered this fight with a professional kickboxing record of 61-12-1 (33 knockouts) and he is ranked as the No.4 super middleweight in the world. He lost to Karapet Karapetyan in 2014 but then he has won four consecutive bouts beating Bai Jinbin (=Kyshenko vs Jinbin) and Jonatan Oliveira in 2015 (=Kyshenko vs Oliveira).
His opponent, Dmitry Valent, has an official record of 25-6-0 and he entered as the No.5 light heavyweight. He fought three times last year beating Wehaj Kingboxing and Panom Topking Boxing but then he lost to Simon Marcus. Kyshenko vs Valent, 77 kg fight of Kunlun Fight 25 Slovakia. Watch the video and rate this fight!