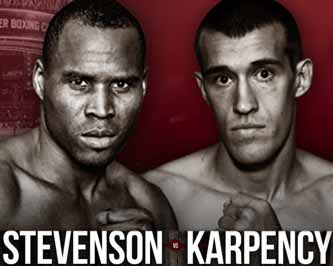 Review by AllTheBestFights.com: 2015-09-11, fight not particularly exciting between Adonis Stevenson and Tommy Karpency: it gets two stars.

Adonis Stevenson entered this fight with a boxing record of 26-1-0 (21 KOs=81%) and he is ranked as the No.2 light heavyweight in the world (currently the #1 in this division is Sergey Kovalev). He suffered his only defeat in 2010 when he faced Darnell Boone, since then he has won 13 consecutive bouts taking revenge on Boone (on March 22, 2013, Stevenson vs Boone 2) and winning the WBC light-Hw title in 2013 against Chad Dawson (The Ring magazine Knockout of the Year: Dawson vs Stevenson). After this fight he has defended his belt five times beating Sakio Bika in his last one (=Stevenson vs Bika).
His opponent, Tommy Karpency, has an official record of 25-4-1 (14 knockouts) and he entered as the No.15 in the same weight class. He lost two consecutive fights in 2012, against Nathan Cleverly and Andrzej Fonfara (=Fonfara vs Karpency), but then he has won four bouts defeating Rayco Saunders in his last one. ‘Superman’ Stevenson vs Karpency is valid for the WBC World light heavyweight title (Stevenson’s sixth defense). Watch the video and rate this fight!