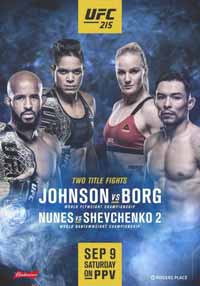 Review by AllTheBestFights.com: 2017-09-09, tough fight but not so exciting: Jeremy Stephens vs Gilbert Melendez gets two stars (UFC Fight of the Night).

Jeremy Stephens entered this fight with a pro record of 25-14-0 (76% finishing rate) and he is ranked as the No.14 featherweight in the world but he won just one out of his last four bouts, against Renan Barao (=Barao Pegado vs Stephens). After this fight he has lost to Frankie Edgar (=Edgar vs Stephens) and Renato ‘Moicano’ Carneiro (=Stephens vs Moicano).
His opponent, the black belt in Bjj and former Strikeforce Lw champion Gilbert Melendez, has an official mma record of 22-6-0 (55% ko/tko victory rate – he has never won via submission) and he entered as the No.46 lightweight but he comes off three consecutive losses, against Anthony Pettis in 2014 (=Pettis vs Melendez), Eddie Alvarez in 2015 (via split decision, Melendez vs Alvarez) and Edson Barboza in 2016 (=Barboza vs Melendez). Jeremy Stephens vs Gilbert Melendez is on the undercard of Amanda Nunes vs Valentina Shevchenko 2 – UFC 215. Watch the video and rate this fight!