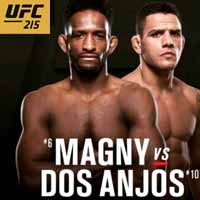 Review by AllTheBestFights.com: 2017-09-09, pretty good finish between Rafael dos Anjos and Neil Magny but it is not enough to get three stars: it gets two (UFC Performance of the Night).

The black belt in Brazilian jiu-jitsu and former Ufc Lw champion Rafael dos Anjos entered this fight with a mma record of 26-9-0 (50% finishing rate) and he is ranked as the No.6 welterweight in the world (currently the #1 in this division is Tyron Woodley). He lost two consecutive fights in 2016, against Eddie Alvarez (=dos Anjos vs Alvarez) and Tony Ferguson (=dos Anjos vs Ferguson), but he came back to win in 2017 against Tarec Saffiedine (=dos Anjos vs Saffiedine).
His opponent, Neil Magny, has an official record of 19-5-0 (47% finishing rate) and he entered as the No.9 in the same weight class. He fought three times last year winning over Hector Lombard (=Lombard vs Magny) and Johny Hendricks (=Hendricks vs Magny) but between these two bouts he was defeated by Lorenz Larkin (=Magny vs Larkin). Neil Magny vs Rafael dos Anjos is on the undercard of Amanda Nunes vs Valentina Shevchenko 2 – UFC 215. Watch the video and rate this fight!