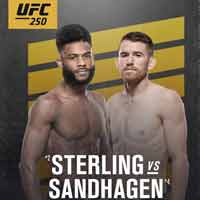 Review by AllTheBestFights.com: 2020-06-06, fight not so exciting between Aljamain Sterling and Cory Sandhagen: it gets two stars (UFC Performance of the Night).
The black belt in Brazilian jiu-jitsu Aljamain Sterling entered this fight with a mma record of 18-3-0 (50% finishing rate) and he is ranked as the No.2 bantamweight in the world. He was defeated by current #1 Bw Marlon Moraes at the end of 2017 (Aljamain Sterling vs Marlon Moraes) but then he has won four fights beating Jimmie Rivera (Jimmie Rivera vs Aljamain Sterling) and Pedro Munhoz in 2019 (Aljamain Sterling vs Pedro Munhoz).
His opponent, Cory Sandhagen, has an official record of 12-1-0 (58% finishing rate) and he entered as the No.5 in the same weight class. He suffered his only loss when he faced Jamall Emmers in 2017, since then he has won seven bouts defeating Mario Bautista, John Lineker (John Lineker vs Cory Sandhagen) and Raphael Assuncao in 2019 (Cory Sandhagen vs Raphael Assuncao). Sterling vs Sandhagen is on the undercard of Amanda Nunes vs Felicia Spencer – UFC 250. Watch the video and rate this fight!