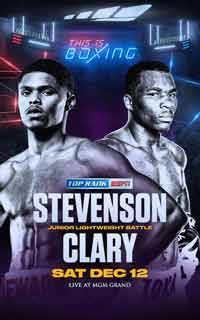 Review by AllTheBestFights.com: 2020-12-12, disappointing fight between Shakur Stevenson and Toka Kahn Clary: it gets two stars (take a look at our ranking of the best boxing fights of 2020).
The undefeated former Olympian Shakur Stevenson entered this fight with a perfect boxing record of 14-0-0 (8 knockouts) and he is ranked as the No.6 featherweight in the world (currently the #1 in this division is Josh Warrington). In his last three bouts Stevenson has won over Alberto Guevara (Shakur Stevenson vs Alberto Guevara), Joet Gonzalez (Shakur Stevenson vs Joet Gonzalez) and Felix Caraballo (Shakur Stevenson vs Felix Caraballo).
His opponent, Toka Kahn Clary, has an official record of 28-2-0 (19 knockouts) and he entered as the No.85 super featherweight. He lost to Kid Galahad in 2018 (Kid Galahad vs Toka Kahn Clary) but then he has beat Carlos Manuel Reyes, Irvin Gonzalez and Jonathan Perez. Clary vs Stevenson is the main event of the evening. Watch the video and rate this fight!

We are sorry, but since we have been contacted by “Top Rank”, we post only Stevenson Clary highlights or amateur videos (as soon as we find it). If you have seen the full fight video you can rate it. THANKS!