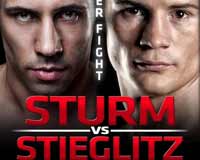 Review: 2014-11-08, nice and tough fight between Felix Sturm and Robert Stieglitz: it gets three stars. The former Wbo, Wba and Ibf Mw champion Felix Sturm entered this fight with a professional boxing record of 39-4-2 (18 knockouts) and he is ranked as the No.6 middleweight in the world, while his opponent, Robert Stieglitz, has an official record of 47-4-0 (27 knockouts) and he entered as the No.5 super middleweight. Both boxers have lost once in 2014: Sturm was defeated by Sam Soliman in their rematch losing the Ibf Mw title (=Sturm vs Soliman 2) while Stieglitz was beat by Arthur Abraham in their third fight losing the Wbo super-Mw belt (=Stieglitz vs Abraham 3); after this bout Stieglitz came back to win beating Sergey Khomitsky (=Stieglitz vs Khomitsky). Sturm vs Stieglitz is the main event of the evening. Watch the video and rate this fight!