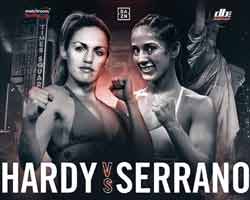 Review by AllTheBestFights.com: 2019-09-13, great fight between Heather Hardy and Amanda Serrano: it is close to get four stars!

The undefeated Heather Hardy entered this fight with a perfect record of 22-0-0 (4 knockouts) and she is ranked as the No.2 featherweight in the world. In her last three bouts she has won over Edina Kiss, Iranda Paola Torres and Shelly Vincent.
Her opponent, the world champion in five different weight classes Amanda Serrano, has a boxing record of 31-1-1 (27 KOs=75%) and she entered as the No.2 super flyweight. She suffered her only loss when she faced Frida Wallberg in 2012, since then she has won 22 consecutive bouts defeating Eva Voraberger in 2019. Hardy vs Serrano is valid for the interim WBC and WBO World Female featherweight title; undercard of Devin Haney vs Zaur Abdullaev. Watch the video and rate this fight!