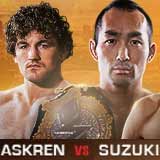 Review: 2014-08-29, one sided fight between Ben Askren and Nobutatsu Suzuki, we can’t give more than two stars. The undefeated and former Bellator Ww champion Ben Askren entered this fight with a prefect record of 13-0-0 (54% finishing rate) and he is ranked as the No.7 welterweight in the world, he made his debut in the One Fc three months ago beating Bakhtiyar Abbasov in the first round (=Askren vs Abbasov).
His opponent, the black belt in kyokushin karate Nobutatsu Suzuki, has an official record of 11-1-2 (91% ko/tko victory rate – he has never won by submission) and he entered as the No.88 in the same weight class, he suffered his only defeat in 2012 when he faced Keita Nakamura; after that bout he has fought and won twice. Askren vs Suzuki is valid for the ONE FC welterweight title (Suzuki’s first defense); undercard of Shinya Aoki vs Kamal Shalorus – ONE FC 19. Watch the video and rate this fight!

END_OF_DOCUMENT_TOKEN_TO_BE_REPLACED 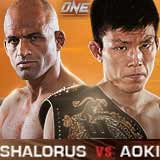 Review: 2014-08-29, pretty good finish between Shinya Aoki and Kamal Shalorus but it is not enough to get three stars: it gets two. The black belt in judo and Bjj Shinya Aoki entered this fight with a professional mma record of 35-6-0 (68% finishing rate) and he is ranked as the No.18 lightweight in the world, he suffered his last defeat in 2012 when he faced Eddie Alvarez at Bellator 66 (=Alvarez vs Aoki 2), since then he has won five consecutive fights.
His opponent, Kamal Shalorus, has an official record of 9-3-2 (56% finishing rate) and he comes off two consecutive victories after three defeats between 2011 and 2012. Aoki vs Shalorus, main event of One Fc 19, is valid for the ONE FC lightweight title (Aoki’s first defense). Watch the video and rate this fight!