It’s been a war. The main event of UFC 154 Georges St Pierre vs Carlos Condit has been a great match, with the crowd of the Montreal’s Bell Centre on its feet for most of the fight. Between them there was also ‘The Spider’ Anderson Silva.
The faces of the two opponents at the press fight speak for themselves: they give everything they got. 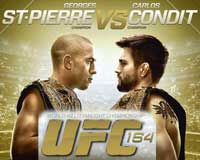 Review: 2012-11-17, nice fight with a spectacular third round: Georges St Pierre vs Carlos Condit gets three stars (UFC Fight of the Night). The American Carlos Condit ranked as the No.2 welterweight in the world, entered the fight with a record of 28-5-0 while Georges St Pierre had a record of 22-2-0 (GSP is not ranked as he hasn’t fought since April 30, 2011 when he defeated Jake Shields at UFC 129). St Pierre vs Condit is valid for the UFC Welterweight title, main event of UFC 154. Watch the video!

Review: 2012-11-17, nice and fast submission (UFC Submission of the Night) between Ivan Menjivar and Azamat Gashimov: three stars. Ivan Menjivar ranked as the No.55 bantamweight in the world, entered the fight with a record of 24-9-0 while Azamat Gashimov had a record of 7-1-0. Menjivar vs Gashimov is on the undercard of Georges St Pierre vs Carlos Condit – UFC 154. Watch the video!

Before Georges St Pierre and Carlos Condit meet to determine the undisputed UFC welterweight champion at UFC 154, November 17, see several of the past fights that have helped define their careers.
We also have a pre-fight interview at Firas Zahabi’s Tristar Gym, where several fighters who will be competing on November 17 are working out, including GSP, Carmont, Cote, Bocek And Makdessi.

Only four days to UFC 154. Now we have two Champions, but at the end of the day, only one will remain.
Who will be?
The Canadian phenomenon Georges St Pierre, undefeated for 5 years, or ‘The Natural Born Killer’ Carlos Condit, current UFC Interim Welterweight Champion and a former WEC Welterweight Champion?
Let us know your choice!

This Saturday Georges St Pierre will make his return in the Octagon after almost a year and half (against Jake Shields at UCF 129).
It was a hard recovery from a bad knee injury (torn ACL), but now GSP is back to fight! Watch the second episode of UFC Primetime: St Pierre vs Condit!