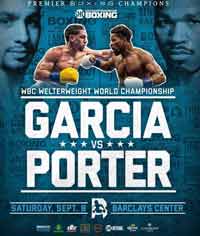 Review by AllTheBestFights.com: 2018-09-08, some good exchanges between Yordenis Ugas and Cesar Miguel Barrionuevo but it is not enough to get three stars: it gets two.

The former Olympian Yordenis Ugas entered this fight with a professional record of 22-3-0 (11 knockouts) and he is ranked as the No.17 welterweight in the world. He suffered two consecutive losses in 2014, against Emmanuel Robles and Amir Imam, but since then he has won seven bouts beating Thomas Dulorme (Thomas Dulorme vs Yordenis Ugas), Ray Robinson (Yordenis Ugas vs Ray Robinson) and Jonathan Batista in his last three.
His opponent, Cesar Miguel Barrionuevo, has a boxing record of 34-3-2 (24 knockouts) and he entered as the No.15 in the same weight class. He suffered his last loss when he faced Ramon de la Cruz Sena in 2013, since then he has collected ten victories taking revenge on Ramon Sena and beating Adrian Luciano Veron in his last two bouts. Ugas vs Barrionuevo is on the undercard of Danny Garcia vs Shawn Porter. Watch the video and rate this fight!

(Free embeddable video hosted on Dailymotion and not uploaded by AllTheBestFights)
https://www.dailymotion.com/video/x6tc33r