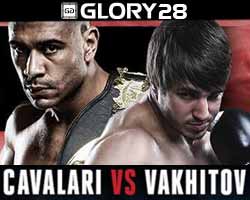 Review by AllTheBestFights.com: 2016-03-12, tough and pretty good fight between Saulo Cavalari and Artem Vakhitov: it gets three stars.

Saulo Cavalari entered this fight with a pro record of 59-3-0 (49 KOs=83%) and he is ranked as the No.2 super cruiserweight in the world. He suffered his last loss when he faced Tyrone Spong in 2014 (=Spong vs Cavalari), since then he has collected four consecutive victories winning the vacant Glory light-Hw title in his last bout, against Zack Mwekassa (=Cavalari vs Mwekassa 2).
His opponent, the former Wmc muay thai Hw champion Artem Vakhitov, has a kickboxing record of 15-5-0 (6 knockouts) and he entered as the No.3 in the same weight class. He fought three times last year losing the first bout against Saulo Cavalari, but then he won over Danyo Ilunga and Loren Javier Jorge. Cavalari vs Vakhitov 2 is valid for the Glory light heavyweight title (Cavalari’s first defense); undercard of Rico Verhoeven vs Mladen Brestovac – Glory 28. Watch the video and rate this fight!