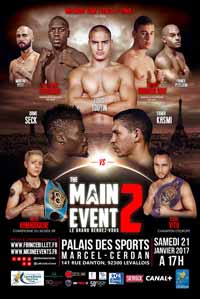 Review by AllTheBestFights.com: 2017-01-21, good performance by both boxers: Cedric Vitu vs Isaac Real gets three stars.

Cedric Vitu entered this fight with a pro boxing record of 44-2-0 (18 knockouts) and he is ranked as the No.21 super welterweight in the world. He suffered his last loss when he faced Siarhei Rabchanka in 2012, since then he has won nine consecutive bouts beating Ruben Varon in 2016.
His opponent, Isaac Real, has a record of 16-1-1 (9 knockouts) and he entered as the No.47 in the same weight class. He lost to Jack Culcay in 2014 (=Culcay vs Real) but then he has won six times. Cedric Vitu vs Isaac Real is valid for the EBU (European) super welterweight title. Watch the video and rate this fight!