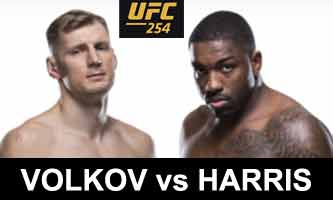 Review by AllTheBestFights.com: 2020-10-24, pretty good finish between Alexander Volkov and Walt Harris but it is not enough to get three stars: it gets two.
The former Bellator and M-1 Global Hw champion Alexander Volkov entered this fight with a mma record of 31-8-0 (74% finishing rate) and he is ranked as the No.8 heavyweight in the world (currently the #1 in this division is Stipe Miocic) but he lost two out of his last three fights, against Derrick Lewis in 2018 (Alexander Volkov vs Derrick Lewis) and Curtis Blaydes in 2020 (Curtis Blaydes vs Alexander Volkov); between these two bouts he beat Greg Hardy (Alexander Volkov vs Greg Hardy).
His opponent, Walt Harris, has an official record of 13-8-0 (100% ko/tko victory rate – he has never won via submission) and he entered as the No.19 in the same weight class but he comes off the loss against Alistair Overeem (Alistair Overeem vs Walt Harris); before this bout, in 2019, he had defeated Sergey Spivak and Alexey Oleynik (Alexey Oleynik vs Walt Harris). Harris vs Volkov is on the undercard of Khabib Nurmagomedov vs Justin Gaethje – UFC 254. Watch the video and rate this fight!