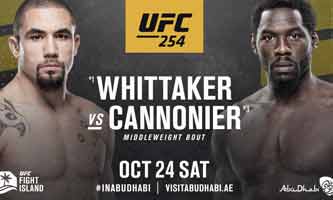 Review by AllTheBestFights.com: 2020-10-24, fight not so exciting between Robert Whittaker and Jared Cannonier: it gets two stars. Moreover this match was ranked in the ‘Top 10 Mma Fights of the Year 2020‘ (ranking generated by our users).
The black belt in hapkido, karate, Tuf Ww tournament winner and former Ufc Mw champion Robert Whittaker entered this fight with a pro mma record of 21-5-0 (67% finishing rate) and he is ranked as the No.2 middleweight in the world. He lost to current #1 Israel Adesanya last year (Robert Whittaker vs Israel Adesanya) but he came back to win against Darren Till in July 2020 (Robert Whittaker vs Darren Till).
His opponent, Jared Cannonier, has a record of 13-4-0 (85% finishing rate) and he entered as the No.7 in the same weight class. He lost two consecutive bouts between 2017 and 2018, against Jan Blachowicz and Dominick Reyes (Dominick Reyes vs Jared Cannonier), but then he has won three fights defeating Anderson Silva (Anderson Silva vs Jared Cannonier) and Jack Hermansson in 2019 (Jack Hermansson vs Jared Cannonier). Cannonier vs Whittaker is on the undercard of Khabib Nurmagomedov vs Justin Gaethje – UFC 254. Watch the video and rate this fight!