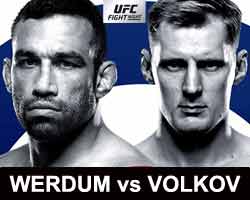 Review by AllTheBestFights.com: 2018-03-17, pretty good fight between Fabricio Werdum and Alexander Volkov: it gets three stars (UFC Performance of the Night).

The black belt in judo, Brazilian jiu-jitsu and former Ufc Hw champion Fabricio Werdum entered this fight with a professional mma record of 23-7-1 (74% finishing rate) and he is ranked as the No.2 heavyweight in the world (currently the #1 in this division is Stipe Miocic). ‘Vai Cavalo’ Werdum fought three times last year losing to Alistair Overeem (Werdum vs Overeem 3) but then he beat Walt Harris (Werdum vs Harris) and Marcin Tybura (Fabricio Werdum vs Marcin Tybura).
His opponent, the former Bellator and M-1 Global Hw champion Alexander Volkov, has an official record of 29-6-0 (76% finishing rate) and he entered as the No.9 in the same weight class. He suffered two consecutive losses in 2015, against Tony Johnson (Volkov vs Johnson) and Cheick Kongo (Kongo vs Volkov), but then he has won five bouts beating Roy Nelson (Nelson vs Volkov) and Stefan Struve in 2017 (Alexander Volkov vs Stefan Struve). Werdum vs Volkov is the main event of UFC Fight Night 127. Watch the video and rate this fight!

(Free embeddable video hosted on Youtube and not uploaded by AllTheBestFights)
https://www.youtube.com/watch?v=lhT5QVAVCJU