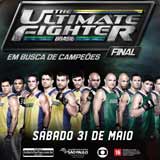 Review: 2014-05-31, good pace and great finish: Marcio Alexandre Jr vs Warlley Alves gets three stars (UFC Performance of the Night). Both undefeated, the black belt in karate Marcio Alexandre Jr entered this fight with a mma record of 12-0-0 (100% finishing rate) while Warlley Alves has a record of 6-0-0 (67% finishing rate); both fighters make their Ufc debut in this bout. ‘Lyoto’ Alexandre Jr vs Alves is the middleweight final of the Ufc The Ultimate Fighter Brazil 3 Finale; undercard of Stipe Miocic vs Fabio Maldonado. Watch the video and rate this fight!