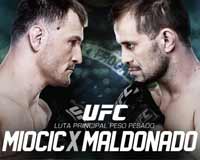 Review: 2014-05-31, fight not particularly exciting between Stipe Miocic and Fabio Maldonado: it gets two stars (Ufc Performance of the Night). Stipe Miocic entered this fight with a professional mma record of 11-1-0 (73% finishing rate) and he is ranked as the No.8 heavyweight in the world, he suffered his only defeat in 2012 when he faced Stefan Struve (=Struve vs Miocic), after that bout he beat Roy Nelson in 2013 (=Nelson vs Miocic) and Gabriel Gonzaga this year (=Gonzaga vs Miocic).
His opponent, Fabio Maldonado, has an official record of 21-6-0 (71% finishing rate) and he entered as the No.34 in the same weight class, he suffered his last defeat in 2012 when he faced Glover Teixeira (=Teixeira vs Maldonado), since then he has fought and won three times beating Roger Hollett, Joey Beltran (=Maldonado vs Beltran) and Gian Villante (=Villante vs Maldonado). Miocic vs Maldonado is the main event of “The Ultimate Fighter Brazil 3 Finale”. Watch the video and rate this fight!