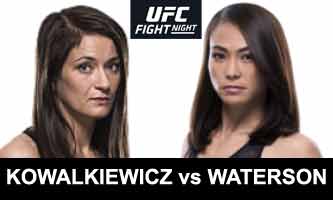 Review by AllTheBestFights.com: 2019-03-30, disappointing fight between Karolina Kowalkiewicz and Michelle Waterson: it gets two stars.

The former Ksw Flw champion Karolina Kowalkiewicz entered this fight with a pro mma record of 12-3-0 (25% finishing rate) and she is ranked as the No.8 women’s strawweight in the world. She fought twice last year beating Felice Herrig and losing to Jessica Andrade (Jessica Andrade vs Karolina Kowalkiewicz).
Her opponent, the black belt in American freestyle karate and former Invicta Fc atomweight champ Michelle Waterson, has a record of 16-6-0 (75% finishing rate) and she entered as the No.10 in the same weight class. She lost two consecutive bouts in 2017, against Rose Namajunas (Rose Namajunas vs Michelle Waterson) and Tecia Torres, but then she has defeated Cortney Casey and Felice Herrig (Felice Herrig vs Michelle Waterson). Kowalkiewicz vs Waterson is on the undercard of Edson Barboza vs Justin Gaethje – UFC on ESPN 2. Watch the video and rate this fight!