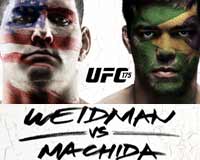 Review: 2014-07-05, Chris Weidman vs Lyoto Machida gets three stars thanks to a great second part of the bout (UFC Fight of the Night). The undefeated Ufc middleweight champion Chris Weidman entered this fight with a perfect mma record of 11-0-0 (73% finishing rate) and he is ranked as the No.1 Mw in the world, he fought twice in 2013 facing in both fights Anderson Silva: in the first bout he won the Ufc Mw belt by ko (4-stars-fight Silva vs Weidman I) while the second time ‘The Spyder’ broke his leg (=Weidman vs Silva 2).
His opponent, the black belt in shotokan karate and Bjj Lyoto Machida, has an official record of 21-4-0 (48% finishing rate) and he entered as the No.2 in the same weight class, he was the Ufc light-Hw champion between 2009 and 2010 but then he lost the belt to Mauricio ‘Shogun’ Rua in their rematch; ‘The Dragon’ had a new title-shot in 2011 but he was defeated by Jon Jones (4-stars-fight Jones vs Machida). Machida moved down in weight class to the middleweight division in 2013 beating Mark Munoz (=Machida vs Munoz) and Gegard Mousasi in 2014 (=Machida vs Mousasi). Weidman vs Machida, main event of UFC 175, is valid for the Ufc middleweight title (Weidman’s second defense). Watch the video and rate this fight!