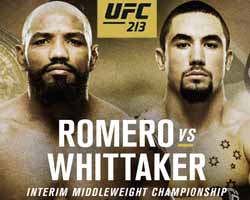 Review by AllTheBestFights.com: 2017-07-08, pretty good finish but the rest of the fight was quite boring: Yoel Romero vs Robert Whittaker gets two stars (UFC Fight of the Night).

Yoel Romero Palacio entered this fight with a pro mma record of 12-1-0 (83% ko/tko victory rate – he has never won via submission) and he is ranked as the No.2 middleweight in the world (currently the #1 in this division is Michael Bisping). His only defeat occurred in 2011 when he fought against Rafael ‘Feijao’ Cavalcante, since then he has won eight fights beating Lyoto Machida (=Machida vs Romero), Ronaldo ‘Jacare’ Souza (=Souza vs Romero) and Chris Weidman in his last three (=Weidman vs Romero).
His opponent, the black belt in hapkido, karate and Tuf Ww tournament winner Robert Whittaker, has a record of 18-4-0 (78% finishing rate) and he entered as the No.5 in the same weight class. He suffered two consecutive losses between 2013 and 2014, against Court McGee (=McGee vs Whittaker) and Stephen Thompson (=Whittaker vs Thompson), but then he has won seven bouts defeating Rafael Natal (=Whittaker vs Natal), Derek Brunson (=Whittaker vs Brunson) and Ronaldo ‘Jacare’ Souza in his last three (=Jacare vs Whittaker). Robert Whittaker vs Yoel Romero is the main event of the Ufc 213 (on the original fight card the main event was Amanda Nunes vs Valentina Shevchenko 2 but the fight was canceled just hours before the event started due to Nunes being ill) and it is valid for the interim Ufc middleweight title. Watch the video and rate this fight!

(Free embeddable video hosted on Youtube and not uploaded by AllTheBestFights)
https://www.youtube.com/watch?v=qCt4H7U8JOE