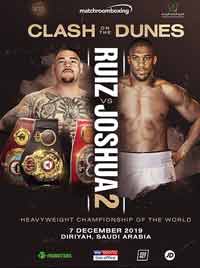 Review by AllTheBestFights.com: 2019-12-07, fight not so exciting between Dillian Whyte and Mariusz Wach: it gets two stars.

The interim Wbc Hw champion Dillian Whyte entered this fight with a professional record of 26-1-0 (18 knockouts) and he is ranked as the No.7 heavyweight in the world (currently the #1 in this division is Deontay Wilder).
He suffered his only loss when he faced Anthony Joshua in 2015 (4-stars fight, Joshua vs Whyte, curiously Whyte defeated Joshua by unanimous decision in his first amateur bout in 2009), after this fight he has won ten consecutive bouts beating Dereck Chisora (Dillian Whyte vs Dereck Chisora 2) and Oscar Rivas in his last two (Dillian Whyte vs Oscar Rivas).
His opponent, Mariusz Wach, has a boxing record of 35-5-0 (19 knockouts) and he entered as the No.48 in the same weight class. He has already fought three times in 2019 losing to Martin Bakole Ilunga (Mariusz Wach vs Martin Bakole Ilunga) and defeating Gogita Gorgiladze and Giorgi Tamazashvili. Whyte vs Wach is on the undercard of Andy Ruiz Jr vs Anthony Joshua 2. Watch the video and rate this fight!