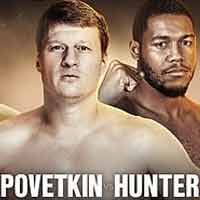 Review by AllTheBestFights.com: 2019-12-07, close fight but not so exciting: Alexander Povetkin vs Michael Hunter gets two stars.

The 2004 Olympic super-heavyweight gold medalist and former Wba Hw champion Alexander Povetkin entered this fight with a pro boxing record of 35-2-0 (24 knockouts) and he is ranked as the No.6 heavyweight in the world (currently the #1 in this division is Deontay Wilder). He lost to Anthony Joshua last year (Anthony Joshua vs Alexander Povetkin) but he came back to win against Hughie Fury in 2019 (Alexander Povetkin vs Hughie Fury).
His opponent, the former Olympian Michael Hunter, has a record of 18-1-0 (12 knockouts) and he entered as the No.21 in the same weight class. He suffered his only loss when he faced Oleksandr Usyk in 2017 (Oleksandr Usyk vs Michael Hunter), after this bout he has won six consecutive bouts defeating Fabio Maldonado (Michael Hunter vs Fabio Maldonado) and Sergey Kuzmin in his last two (Michael Hunter vs Sergey Kuzmin). Povetkin vs Hunter, WBA heavyweight title eliminator, is on the undercard of Andy Ruiz Jr vs Anthony Joshua 2. Watch the video and rate this fight!