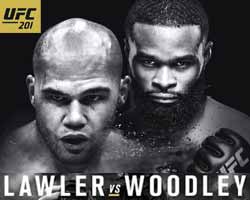 Review by AllTheBestFights.com: 2016-07-30, pretty good finish between Robbie Lawler and Tyron Woodley: it gets three stars (UFC Performance of the Night).

The Ufc Ww champion Robbie Lawler entered this fight with a professional mma record of 27-10-0 (78% finishing rate) and he is ranked as the No.1 welterweight in the world. He suffered his last loss when he faced Johny Hendricks in 2014 (=Hendricks vs Lawler I) but then he has won five consecutive fights taking revenge on Hendricks (in a fight valid for the Ufc Ww belt Hendricks vs Lawler II) and beating Carlos Condit in his last bout (4-stars fight =Robbie Lawler vs Carlos Condit).
His opponent, Tyron Woodley, has an official record of 15-3-0 (67% finishing rate) but he is not ranked as he hasn’t fought since January 31, 2015 when he defeated Kelvin Gastelum via split decision (=Woodley vs Gastelum). Woodley’s last loss occurred in 2014 against Rory MacDonald (=MacDonald vs Woodley) while Lawler defeated MacDonald twice (in 2013 MacDonald vs Lawler I and in 2015 Lawler vs MacDonald II). Lawler vs Woodley, main event of Ufc 201, is valid for the Ufc welterweight title (Lawler’s third defense). Watch the video and rate this fight!