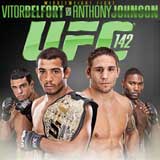 Review: 2012-01-14, we would give five stars to the brazilian audience/supporters but we have to rate the bout, Vitor Belfort vs Anthony Johnson was a good one: three stars. Vitor Belfort (20-9-0) entered as the No.8 middleweight in the world while Anthony Johnson (10-3-0) entered as the No.11. Belfort vs Johnson is on the undercard of Aldo vs Mendes (UFC 142). Watch the video!

Alternative highlights video
(This is a free embeddable highlights video hosted on Youtube and it was not uploaded by AllTheBestFights, to report it please visit this link where the video is hosted)