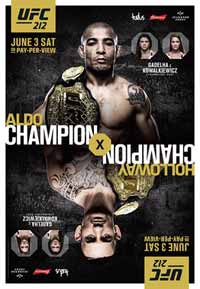 Review by AllTheBestFights.com: 2017-06-03, some good exchanges between Vitor Belfort and Nate Marquardt but it is not enough to get three stars: it gets two.

The black belt in Bjj, judo and former Ufc Hw and light-Hw champion Vitor Belfort entered this fight with a record of 25-13-0 (84% finishing rate) and he is ranked as the No.11 middleweight in the world but his last win occurred in 2015, against Dan Henderson (=Belfort vs Henderson 3). After this bout ‘The Phenom’ Belfort has lost three consecutive fights: with Ronaldo ‘Jacare’ Souza (=Belfort vs Jacare), Gegard Mousasi (=Mousasi vs Belfort) and Kelvin Gastelum (then overturned in a no-contest because the American tested positive for marijuana, Belfort vs Gastelum).
His opponent, the black belt in Brazilian jiu-jitsu and former Strikeforce Ww champion Nate Marquardt, has a mma record of 35-17-2 (77% finishing rate) and he entered as the No.36 in the same weight class. He fought twice last year losing to Thiago Santos and beating Tamdan McCrory; after this bout he lost to Sam Alvey in 2017. Vitor Belfort vs Nate Marquardt is on the undercard of Jose Aldo vs Max Holloway – UFC 212. Watch the video and rate this fight!

(Free embeddable video hosted on Youtube and not uploaded by AllTheBestFights)
https://www.youtube.com/watch?v=P1kTcL7z5D8