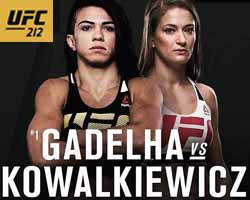 Review by AllTheBestFights.com: 2017-06-03, fight not so exciting between Claudia Gadelha and Karolina Kowalkiewicz: it gets two stars (UFC Performance of the Night).

The black belt in Bjj Claudia Gadelha entered this fight with a pro record of 14-2-0 (57% finishing rate) and she is ranked as the No.3 women’s strawweight in the world. ‘Claudinha’ fought twice last year losing to current #1 Ufc champion Joanna Jedrzejczyk (=Jedrzejczyk vs Gadelha 2) and beating Cortney Casey.
Her opponent, the Ksw Flw champion Karolina Kowalkiewicz, has an official mma record of 10-1-0 (30% finishing rate) and she entered as the No.6 in the same weight class. She fought three times in 2016 defeating Heather Jo Clark (=Kowalkiewicz vs Clark) and Rose Namajunas (=Namajunas vs Kowalkiewicz) but then she was defeated by Joanna Jędrzejczyk (=Jedrzejczyk vs Kowalkiewicz). Claudia Gadelha vs Karolina Kowalkiewicz is on the undercard of Jose Aldo vs Max Holloway – UFC 212. Watch the video and rate this fight!