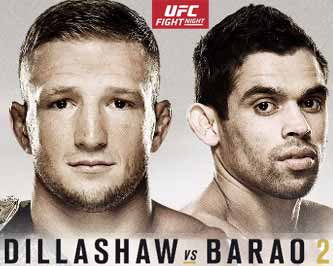 Review by AllTheBestFights.com: 2015-07-25, great performance by both fighters: TJ Dillashaw vs Renan Barao 2 gets three stars (UFC Performance of the Night).

TJ Dillashaw entered this fight with a professional mma record of 11-2-0 (73% finishing rate) and he is ranked as the No.1 bantamweight in the world. He suffered his last loss in 2013 when he faced Raphael Assuncao (=Assuncao vs Dillashaw), since then he has collected three victories winning the Ufc Bw belt in 2014 beating Barao in their first fight (=Barao vs Dillashaw I) and defending the title once against Joe Soto (=Dillashaw vs Soto).
His opponent, the black belt in Brazilian jiu-jitsu Renan Barao Pegado, has an official record of 33-2-0 (70% finishing rate) and he entered as the No.2 in the same weight class. After losing to Dillashaw he came back to win against Mitch Gagnon (=Barao vs Gagnon). Dillashaw vs Barao 2, main event of UFC on Fox 16, is valid for the Ufc bantamweight title (Dillashaw’s second defense). Watch the video and rate this fight!