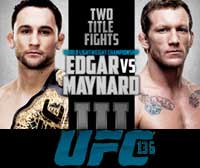 Review: 2011-10-08, even with the final ko (“Knockout of the Night”) with which Frankie Edgar defeated Gray Maynard (first defeat in his career), the fight was not very spectacular: two stars. Frankie Edgar (13-1-1) entered as the No.1 lightweight in the world while Gray Maynard (10-0-1) entered as the No.3. Edgar vs Maynard 3 was the main event of the UFC 136 and was valid for the UFC Lightweight Championship. Watch the video!