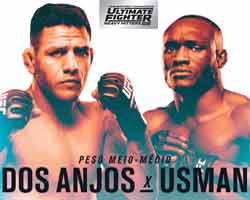 Review by AllTheBestFights.com: 2018-11-30, some good exchanges between Rafael dos Anjos and Kamaru Usman but it is not enough to get three stars: it gets two (UFC Performances of the Night).

The black belt in Brazilian jiu-jitsu and former Ufc Lw champion Rafael dos Anjos entered this fight with a professional mma record of 28-10-0 (50% finishing rate) and he is ranked as the No.3 welterweight in the world (currently the #1 in this division is Tyron Woodley). In his last three bouts RDA has beat Neil Magny (Rafael dos Anjos vs Neil Magny) and Robbie Lawler (Robbie Lawler vs Rafael dos Anjos) but then he has lost to Colby Covington (Rafael dos Anjos vs Colby Covington).
His opponent, the Tuf tournament winner Kamaru Usman, has an official record of 13-1-0 (54% finishing rate) and he entered as the No.6 in the same weight class. He suffered his only loss when he faced Jose Caceres at his second professional mma fight in 2013, since then he has collected twelve consecutive victories beating Emil Weber Meek (Kamaru Usman vs Emil Weber Meek) and Demian Maia in 2018 (Demian Maia vs Kamaru Usman). Dos Anjos vs Usman is the main event of The Ultimate Fighter: Heavy Hitters Finale – UFC Tuf 28. Watch the video and rate this fight!