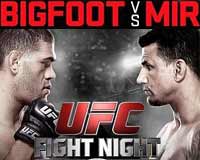 Review by AllTheBestFights.com: 2015-02-22, Antonio Silva vs Frank Mir gets three stars thanks to a good finish (UFC Performance of the Night).

The black belt in karate, judo and Bjj Antonio ‘Bigfoot’ Silva entered this fight with a professional mma record of 18-6-1 (89% finishing rate) and he is ranked as the No.6 heavyweight in the world but the last time he won was in 2013 when he faced Alistair Overeem (=Overeem vs Bigfoot). After this bout he was defeated by #1 Ufc Hw champion Cain Velasquez in their rematch (=Velasquez vs Silva 2), then he drew against Mark Hunt in one of the best mma fights of 2013 (bout overturned in no-contest after Bigfoot tested positive for elevated levels of testosterone, Bigfoot vs Hunt) and he lost again in his last fight against Andrei Arlovski (=Silva vs Arlovski 2).
His opponent, the balck belt in karate and Brazilian jiu-jitsu and former Ufc Hw champion (in 2004) Frank Mir, has an official record of 16-9-0 (75% finishing rate) and he entered as the No.55 in the same weight class; the last time he won was in 2011 when he faced Antonio Rodrigo Nogueira (=Mir vs Nogueira 2), since then he has lost four consecutive bouts: against Junior dos Santos (=Dos Santos vs Mir), Daniel Cormier (=Cormier vs Mir), Josh Barnett (=Mir vs Barnett) and Alistair Overeem (=Overeem vs Mir). ‘Pezao’ Silva vs Mir is the main event of UFC Fight Night 61. Watch the video and rate this fight!