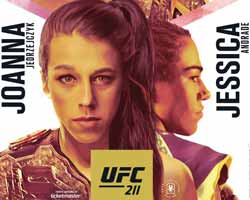 Review by AllTheBestFights.com: 2017-05-13, some good single shots between Joanna Jedrzejczyk and Jessica Andrade but it is not enough to get three stars: it gets two.

The undefeated 2010 Wkn kickboxing and current Ufc champion Joanna Jedrzejczyk entered this fight with a perfect mma record of 13-0-0 (38% finishing rate) and she is ranked as the No.1 women’s strawweight in the world. She fought twice last year winning over Claudia Gadelha (=Jedrzejczyk vs Gadelha II) and Karolina Kowalkiewicz (=Jedrzejczyk vs Kowalkiewicz).
Her opponent, Jessica Andrade, has an official record of 16-5-0 (75% finishing rate) and she entered as the No.2 in the same weight class. ‘Bate Estaca’ Andrade lost to Raquel Pennington in 2015 but since then she has beat Jessica Penne, Joanne Calderwood (=Calderwood vs Andrade) and Angela Hill (4-stars fight, Andrade vs Hill). Joanna Jedrzejczyk vs Jessica Andrade is valid for the Ufc women’s strawweight title (Jedrzejczyk’s fifth defense); undercard of Stipe Miocic vs Junior dos Santos 2 – UFC 211. Watch the video and rate this fight!