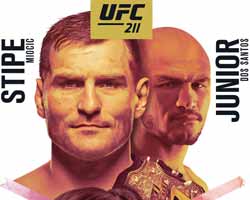 Review by AllTheBestFights.com: 2017-05-13, pretty good fight between Stipe Miocic and Junior dos Santos 2: it gets three stars (UFC Performance of the Night).

The Ufc Hw champion Stipe Miocic entered this fight with a professional mma record of 16-2-0 (81% finishing rate) and he is ranked as the No.1 heavyweight in the world. He suffered his last loss when he faced Junior dos Santos in their first bout in 2014 (via unanimous decision, dos Santos vs Miocic), after this fight he has collected four victories winning the Ufc belt against Fabricio Werdum (=Werdum vs Miocic) and defending it once with Alistair Overeem (=Miocic vs Overeem).
His opponent, the black belt in Brazilian jiu-jitsu and former Ufc Hw champion Junior dos Santos, has an official record of 18-4-0 (78% finishing rate) and he entered as the No.5 in the same weight class. ‘Cigano’ lost to Alistair Overeem in 2015 (=dos Santos vs Overeem) but JDS came back to win in 2016 against Ben Rothwell (=dos Santos vs Rothwell). Stipe Miocic vs Junior dos Santos 2, main event of the Ufc 211, is valid for the Ufc heavyweight title (Miocic’s second defense). Watch the video and rate this fight!

(Free embeddable video hosted on Youtube and not uploaded by AllTheBestFights)
https://www.youtube.com/watch?v=kdao3v2vh24