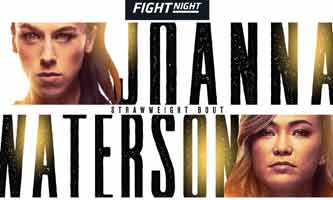 Review by AllTheBestFights.com: 2019-10-12, good fight between Joanna Jedrzejczyk and Michelle Waterson: it gets three stars.

The former Wkn kickboxing and former Ufc strawweight champ Joanna Jedrzejczyk entered this fight with a professional mma record of 15-3-0 (33% finishing rate) and she is ranked as the No.4 women’s strawweight in the world but she won just one out of her last four bout, against Tecia Torres last year (Joanna Jedrzejczyk vs Tecia Torres); after this fight she has lost to Valentina Shevchenko (Valentina Shevchenko vs Joanna Jedrzejczyk).
Her opponent, the black belt in American freestyle karate and former Invicta Fc atomweight champion Michelle Waterson, has an official record of 17-6-0 (71% finishing rate) and she entered as the No.6 in the same weight class. She lost two consecutive bouts in 2017, against Rose Namajunas (Rose Namajunas vs Michelle Waterson) and Tecia Torres, but then she has won three fight defeating Karolina Kowalkiewicz in her last one (Karolina Kowalkiewicz vs Michelle Waterson). Joanna vs Waterson is the main event of UFC Fight Night 161 (UFC on ESPN+ 19). Watch the video and rate this fight!