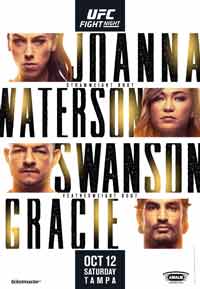 Review by AllTheBestFights.com: 2019-10-12, good exchanges between Mackenzie Dern and Amanda Ribas: it gets three stars.

The undefeated black belt in Brazilian jiu-jitsu, ADCC and no-gi BJJ world champion Mackenzie Dern entered this fight with a perfect mma record of 7-0-0 (57% submission victory rate – she has never won via ko/tko) but she is not ranked as she hasn’t fought since May 12, 2018 when she defeated Amanda Bobby Cooper (Mackenzie Dern vs Amanda Bobby Cooper); before this bout, in March 2018, she had also beat Ashley Yoder.
Her opponent, Amanda Ribas, has an official record of 7-1-0 (86% finishing rate) and she entered as the No.29 women’s strawweight in the world. She suffered her only loss when she faced Polyana Viana in 2015, since then she has beat Jennifer Gonzalez Araneda and Emily Whitmire. Dern vs Ribas is on the undercard of Joanna Jedrzejczyk vs Michelle Waterson – UFC Fight Night 161 (UFC on ESPN+ 19). Watch the video and rate this fight!