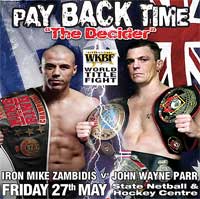 Review: 2011-05-27, John Wayne Parr and Mike Zambidis had already faced two times: in 2002 Zambidis won the final of the K-1 max Oceania while in 2009 John Wayne Parr defeated the greek fighter; so the title of this K-1 and kick boxing event was “Payback Time – The Decider”. In this third fight John Wayne Parr knocked down Mike Zambidis three times in the first round and won by TKO; John Wayne Parr vs Mike Zambidis 3 was valid for the International World Title WKBF (K-1 rules, 72 kg): nice battle! Watch the video!