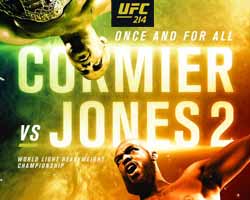 Review by AllTheBestFights.com: 2017-07-29, close fight with some nice exchanges: Daniel Cormier vs Jon Jones 2 gets three stars (UFC Performance of the Night).

The former Strikeforce Hw and current Ufc light-Hw champion Daniel Cormier entered this fight with a professional mma record of 19-1-0 (63% finishing rate) and he is ranked as the No.1 light heavyweight in the world. ‘DC’ suffered his only loss against Jon Jones in their first fight in 2015 (=Jones vs Cormier I), since then he has won four bouts beating Anderson Silva (=Cormier vs Silva) and Anthony Johnson in his last two (=Cormier vs Johnson 2).
His opponent, the black belt in gaidojutsu and former Ufc light-Hw champion Jon Jones, has an official record of 22-1-0 (68% finishing rate) but he is not ranked as he hasn’t fought since April 23, 2016 when he defeated Ovince Saint Preux (who had replaced Cormier because ‘DC’ had injured his foot three weeks before the fight, Jones vs St Preux). Jon ‘Bones’ Jones’ only loss was, in reality, a disqualification suffered against Matt Hamill in 2009 due to multiple “12-6 elbows” (strike brought from a high position toward the floor), since then he has collected 13 consecutive victories but after fighting with Cormier he was stripped of the belt and suspended from the UFC in connection with a hit-and-run incident that he was involved in and stripped of his interim title in 2016 because he tested positive for banned substances three days before the rematch with Cormier at Ufc 200. Jon Jones vs Daniel Cormier 2, main event of Ufc 214, is valid for the Ufc light heavyweight title. Watch the video and rate this fight!

(Free embeddable video hosted on Youtube and not uploaded by AllTheBestFights)
https://www.youtube.com/watch?v=gEzTZ6dbCvA