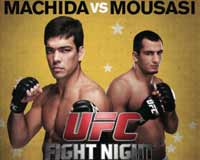 Review: 2014-02-15, technical fight with some nice kicks and combinations but the bout was not so exciting: Lyoto Machida vs Gegard Mousasi gets two stars (UFC Fight of the Night). Lyoto Machida entered this fight with a professional mma record of 20-4-0 (50% finishing rate) and he is ranked as the No.3 middleweight in the world, he is a black belt in Shotokan karate (3rd dan) and in Brazilian jiu-jitsu, last year he fought three times beating Dan Henderson (=Machida vs Henderson), losing to Phil Davis (=Machida vs Davis) and defeating Mark Munoz with a spectacular high kick in his middleweight debut (=Machida vs Munoz).
His opponent, the 28-year-old Gegard Mousasi (seven less than Machida), has an official record of 34-3-2 (85% finishing rate) and he entered as the No.10 light heavyweight but in this fight he returns to the lower division, currently the #1 in the middleweight class is Chris Weidman. Mousasi started his fighting career practicing judo (he is a black belt) but then he practiced boxing (winning the amateur Netherlands title) and kickboxing. He suffered his last defeat against Muhammed ‘King Mo’ Lawal in 2010 losing also the Strikeforce light heavyweight title but since then he collected six victories and one draw. Machida vs Mousasi is the main event of UFC Fight Night 36 – Ufn 36. Watch the video and rate this fight!