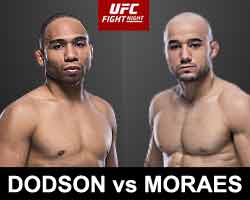 Review by AllTheBestFights.com: 2017-11-11, close fight but not so exciting between John Dodson and Marlon Moraes: it gets two stars.

The black belt in gaidojutsu and Tuf 14 Bw tournament winner John Dodson entered this fight with a mma record of 19-8-0 (58% finishing rate) and he is ranked as the No.7 bantamweight in the world (currently the #1 in this division is TJ Dillashaw). He lost to John Lineker last year (=Lineker vs Dodson) but he came back to win in 2017 against Eddie Wineland (=Dodson vs Wineland).
His opponent, the former Wsof Bw champion Marlon Moraes, has an official record of 18-5-1 (72% finishing rate) and he entered as the No.11 in the same weight class but he comes off the loss against Raphael Assuncao (via split decision, Moraes vs Assuncao). Moraes vs Dodson is on the undercard of Dustin Poirier vs Anthony Pettis – UFC Fight Night 120. Watch the video and rate this fight!