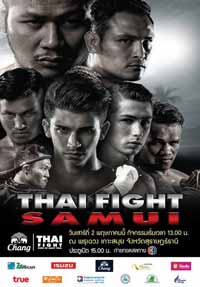 Review by AllTheBestFights.com: 2015-05-02, three stars for the best bout of Thai Fight Samui 2015: Saiyok Pumpanmuang vs Yurik Davtyan (we are not going to post the other fights: Iquezang Kor Rungthanakeat vs Marco Re, Tengneng Sitjesairoong vs Gaetan Dambo, Yodsanklai Fairtex vs Hamish Willey, Sudsakorn Sor Klinmee vs Ramzi Nouainia, Antoine Pinto vs Matheus Pereira, Saenchai vs Matt Embree).

The 2007 Rajadamnern and 2010 Lumpinee Stadium champion Saiyok Pumpanmuang entered this fight with a professional kickboxing record of 228-42-1 (or 213-41-1 on wikipedia) while his opponent, Yurik Davtyan, has an official record of 13-7-1. Saiyok suffered his last defeat in 2013 when he faced Sudsakorn Sor Klinmee (=Saiyok vs Sudsakorn), since then he has won five consecutive bouts. Saiyok vs Davtyan is a Kard Chuek style fight, they don’t use normal boxing gloves but they use just some rope around their hands like in the ancient muay thai. Watch the video and rate this fight!