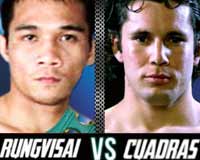 Review: 2014-05-31, nice fight but shameful ending, we want to see a rematch: Srisaket Sor Rungvisai vs Carlos Cuadras gets three stars. Srisaket Sor Rungvisai entered this fight with a professional boxing record of 27-3-1 (25 KOs=92%) and he is ranked as the No.3 super flyweight in the world, he suffered his last loss in 2010 when he faced then-undefeated Kenji Oba, since then he has collected 26 consecutive victories and he won the Wbc world title in 2013 against Yota Sato (=Sato vs Rungvisai); then he successfully defended the belt once against Hirofumi Mukai (=Rungvisai vs Mukai),
His opponent, the undefeated Carlos Cuadras, has a perfect record of 29-0-0 (24 KOs=83%) and he entered as the No.6 in the same weight class, he fought twice in 2013 defeating Victor Zaleta (=Cuadras vs Zaleta) and Songseanglek Phosuwangym; currently the #1 in this division is Omar Andres Narvaez. Rungvisai vs Cuadras is valid for the WBC super flyweight title (Srisaket’s second defense), first world title shot for Cuadras. Watch the video and rate this fight!

END_OF_DOCUMENT_TOKEN_TO_BE_REPLACED 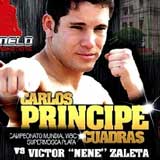 Review: 2013-03-02, good fight with one knockdown: Cuadras vs Zaleta gets three stars. Carlos Cuadras (27-0-0 with 22 victories coming by way of knockout) entered as the No.5 super flyweight in the world while Victor Zaleta (20-3-1) entered as the No.26 bantamweight. Cuadras vs Zaleta is valid for the WBC Silver super flyweight title. Watch the video!