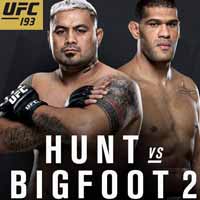 Review by AllTheBestFights.com: 2015-11-15, some good single shots but it is not enough to get three stars: Mark Hunt vs Antonio Silva 2 gets two.

The 2001 K-1 WGP champion Mark Hunt entered this fight with a professional mma record of 10-10-1 (70% ko/tko victory rate – he has never won via submission) and he is ranked as the No.9 heavyweight in the world (currently the #1 in this division is Fabricio Werdum) while his opponent, the black belt in karate, judo and Bjj Antonio ‘Bigfoot’ Silva, has an official record of 19-7-1 (89% finishing rate) and he entered as the No.11 in the same weight class. Both fighters have won just one out of their last five bouts: Hunt beat Roy Nelson in 2014 (=Hunt vs Nelson) but then he lost to Fabricio Werdum (=Werdum vs Hunt) and Stipe Miocic (=Hunt vs Miocic) while ‘Bigfoot’ Silva came back to win in his last bout, against Soa Palelei in August 2015 (=Silva vs Palelei) but he had lost to Frank Mir in February (=Silva vs Mir). The first fight between Hunt and ‘Pezao’ Silva ended in a draw but it was one of the best mma fights of 2013 (=Silva vs Hunt I); this second fight is on the undercard of Ronda Rousey vs Holly Holm – UFC 193. Watch the video and rate this fight!