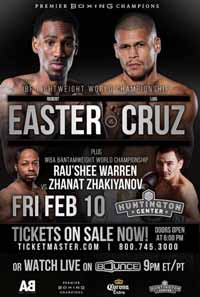 The Wba and Ibo Bw champion Rau’shee Warren entered this fight with a professional record of 14-1-0 (4 knockouts) and he is ranked as the No.11 bantamweight in the world. He suffered his only loss when he faced Juan Carlos Payano in 2015 (=Payano vs Warren) but he took revenge on Payano in 2016 (=Payano vs Warren 2).
His opponent, Zhanat Zhakiyanov, has a boxing record of 26-1-0 (18 knockouts) but he is not ranked as he hasn’t fought since November 7, 2015 when he defeated Yonfrez Parejo (=Parejo vs Zhakiyanov). Zhanat Zhakiyanov vs Rau’shee Warren is valid for the WBA and IBO World bantamweight titles; undercard of Robert Easter Jr vs Luis Cruz. Watch the video and rate this fight!