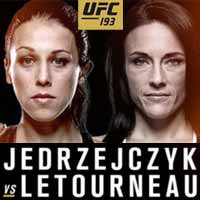 Review by AllTheBestFights.com: 2015-11-15, fight not particularly exciting between Joanna Jedrzejczyk and Valerie Letourneau: it gets two stars.

The undefeated Joanna Jedrzejczyk entered this fight with a perfect record of 10-0-0 (50% finishing rate) and she is ranked as the No.1 women’s strawweight in the world. She has fought twice in 2015 winning the Ufc Sw belt against Carla Esparza (=Esparza vs Jedrzejczyk) and defending it once with Jessica Penne (=Jedrzejczyk vs Penne).
Her opponent, Valerie Letourneau, has a mma record of 8-3-0 (63% finishing rate) and she entered as the No.7 in the same weight class. She suffered her last loss in 2012 when she faced Claudia Gadelha (via split decision), since then she has won four consecutive bouts beating Maryna Moroz in his last fight (=Moroz vs Letourneau). Jedrzejczyk vs Letourneau is valid for the Ufc women’s strawweight title (Jedrzejczyk’s second defense); undercard of Ronda Rousey vs Holly Holm – UFC 193. Watch the video and rate this fight!