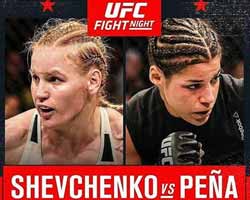 Review by AllTheBestFights.com: 2017-01-28, nice finish between Valentina Shevchenko and Julianna Pena: it gets three stars (UFC Performance of the Night).

The black belt in tae-kwon-do, judo and former Wako, Wmf and Kunlun fight champion Valentina Shevchenko entered this fight with a pro mma record of 13-2-0 (69% finishing rate) and she is ranked as the No.3 women’s bantamweight in the world. She fought twice last year losing to current #1 Amanda Nunes (=Nunes vs Shevchenko) and winning over Holly Holm (=Holm vs Shevchenko).
Her opponent, the Tuf 18 tournament winner Julianna Pena, has a record of 8-2-0 (75% finishing rate) and she entered as the No.7 in the same weight class. She suffered two consecutive defeats between 2012 and 2013, against Sarah Moras and DeAnna Bennett, but then she has won four bouts beating Cat Zingano in 2016 (=Zingano vs Pena). Valentina Shevchenko vs Julianna Pena is the main event of UFC on Fox 23. Watch the video and rate this fight!